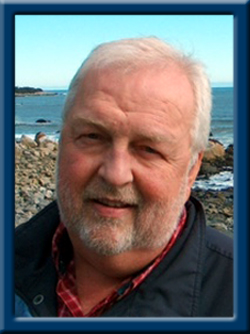 Fawthrop – Douglas Austin, 66, of Halifax, passed away peacefully in Melville Lodge on December 25, 2015.
Born in Montreal, he was a son of the late Douglas A. and M. Jackie (Poirier) Fawthrop.
Raised in Cornwall, Ontario Doug moved his family to Nova Scotia in the 70’s to attend Dalhousie University. He was an active businessman in Halifax while completing his MBA and Law Degree. Eventually he made his way to the South Shore of Nova Scotia where he took over operations of White Point Beach Lodge. He became a champion for the Tourism and Hospitality industry in the Province and a part owner of the Resort in 1988. His contribution to Tourism has been appreciated and recognized over his career with awards and recognitions far too numerous to list. He gained the respect and admiration of all in the Tourism community. Doug was tirelessly supportive of causes and activities in the Queens County area. He loved and was dedicated to White Point Beach Resort, which he grew from a small seasonal operation to a world class full service destination. His greatest love and accomplishment however was his family, his wife, children and grandchildren who he kept close to his heart always.
He is survived by his wife Denise Fawthrop, children Natalie Fawthrop Pooler (Bruce Pooler), Kristen Giguère (Jean-Sebastien Giguère), Jesse Fawthrop (Shaunessy Fawthrop), Lucienne Fawthrop (Troy Woodworth). Grandchildren Raine, Maxime, Luka, Addison, Félix, Ryder, and Olivia. Siblings Richard, Susie, Laurie, Kelley, and Jackie.
Memorial service will be held at Holy Trinity Anglican Church (Liverpool, NS) at 2pm on January 4th. Memorial donations may be made to any of the following: Alzheimer’s Society of NS, Arthritis Society or Melville Lodge. Online condolences can be made at www.chandlersfuneral.com

Offer Condolence for the family of Fawthrop; Douglas Austin