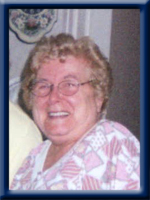 Born in Cambridge, Massachusetts, she was a daughter of the late Irving and Gwendolyn (Harrington) Gardner.

Marie enjoyed playing cards, darts and dancing. She was a member of the Royal Canadian Legion, Branch #38, Liverpool

She was predeceased by her husband Allen; stepsons Shawn and Michael.

Cremation has taken place under the direction of Chandlers’ Funeral Home, Liverpool. A graveside service will be held on Wednesday, July 24th, 2013, at 11:00 a.m., from Seaside Community Cemetery, Brooklyn. Reverend Sheila Redden-Smith officiating. Family flowers only. Donations may be made to the Nova Scotia Heart and Stroke Foundation. Online condolences may be made to the family at www.chandlersfuneral.com

Offer Condolence for the family of Farcey; Marie Estella