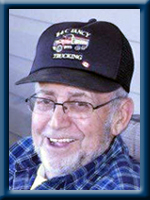 Born in New Elm, Lunenburg County, he was the eldest son of the late Raymond and Lucy (Weagle) Fancy.

Ron was a truck driver all his working life retiring in 1994 due to ill health. When he was younger, he was an avid stock car driver winning several championships. He loved spending time with his family and his four legged companions, Benji and Kelsie, that he loved dearly. He was active as secretary and dispatcher for the Queens County Truckers Association and an active driver for the Queens Manor bus and delivery man for the local Sobeys Store. He liked tinkering in his garage or going for drives in the country. He was a member of the Liverpool Fire Fighters Association for 18 years and, at the time of his death, was an honorary firefighter.

Ron was predeceased by his wife of 51 years Barbara (Whynot), brother Roger. And several brothers and sisters in law.

Offer Condolence for the family of Fancy; Ronald Kenneth