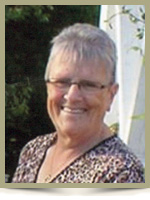 FANCY – Barbara M., 70, of Liverpool, passed away peacefully into the arms of her Lord on Sunday, August 14th, 2011 with her husband and children at her side.

Born in Liverpool, she was the daughter of Marion May (Wagner) Whynot and the late Reginald Whynot.

Barb was a housekeeper for a number of years for numerous households in Liverpool. She also enjoyed cooking, especially Christmas dinners in which she took great pride. Barb will be fondly remembered as a loving mother, grandmother and great grandmother who always enjoyed her time with family. Barb was a collector of many things; her specialty being angels which decorated every corner of her home.

Cremation has taken place under the direction of Chandlers’ Funeral Home, Liverpool. Funeral service will be held Wednesday, August 17th, 2011 at 2:00 p.m. in the Salvation Army Liverpool Community Church. Capts. Kirk and Sharon MacLeod officiating. Reception to follow. No flowers by request, donations may be made to Salvation Army Corps, Liverpool or the Amherst Wesleyan Church. Online condolences may be made to www.chandlersfuneral.com

Offer Condolence for the family of Fancy; Barbara Marion