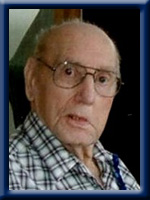 Born in Sheffield Mills, Kings County, he was a son of the late Carmon and Lina (Hirtle) Fancey.

Victor was a veteran of WWII, having served overseas. He was a loving husband, father, and grandfather. He spent most of his working life as a truck driver and woodsman. Victor enjoyed carpentry and hunting and he was well known for his joke telling. He was a member of North Brookfield United Baptist Church.

He was predeceased by grandsons Carmon and Derek, sisters Beatrice, Violet, Blossom “Bob”.

Funeral Service will be held Monday, January 18th, 2010 at 2:00 P.M., from Chandlers’ Funeral Home, Liverpool. Reverend Lloyd Gillieo officiating. Burial will be in Rosette Cemetery, North Brookfield. Family flowers only. Donations may be made to the Nova Scotia Heart and Stroke Foundation or to a charity of your choice. Online condolences may be made at www.chandlersfuneral.com

Offer Condolence for the family of Fancey, Victor Harry