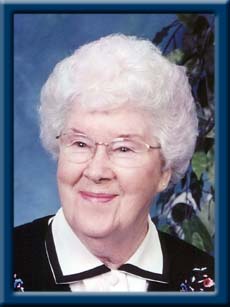 EMENAU – Hilda Beatrice, 93, of Liverpool, Queens County, passed away peacefully at home on July 15, 2017.
Born in Brooklyn, Queens County, on August 20, 1923, she was a daughter of the late Edgar R. and Mildred (Fulton) Gardner.
In earlier years, Hilda was a stenographer at the former Bowater Mersey Paper Mill in Brooklyn. She was a member of the Zion United Church and the Zion UCW, a former member of the Liverpool Curling Club, the Liverpool K-40 Club and the Kinettes Club. She was also co-owner of F.C. Emenau Pharmacy with her husband F.C. “Ted” Emenau, owner and pharmacist.
Hilda was loved by her family and everyone who had the pleasure of knowing her. She was kind and thoughtful to others and her home was always open to welcome those who visited. Her family brought her much happiness and she enjoyed the traditional family Boxing Day gathering at her home and summer gatherings at the family cottage.
She is survived by her four sons, Neil (Elizabeth), Reid (Patricia) Jeffrey (Bonnie Ramey) and Kevin (Debra), four grand daughters, Heather (Chad) Ellis, Kelly (Jessie) Sarty, Lindsay (John) Cusack, and Courtney Emenau. Six great grandchildren Myles and Emma Ellis, Owen and Aila Sarty, Addison and Callie Cusack. Her brother Murray Gardner and several nieces and nephews.
She was predeceased by her loving husband Frederick “Ted” Emenau who shared 58 years of marriage, a brother Ross (Ruth) Gardner, sister Frances P. (Harry) Kuniholm and sister-in-law Arna Gardner.
Cremation has taken place under the direction of Chandlers’ Funeral Home, Liverpool. A celebration of Hilda’s life will be held Wednesday, July 19, 2017 at 11:00 a.m. in Zion United Church, Liverpool. Reverend Carol Smith officiating. Burial will be in Zion United Cemetery, Payzant Street, Liverpool. Family flowers only, donations may be made to Queens county Branch of the Victorian Order of Nurses, Zion United Church, Liverpool, Queens General Hospital Foundation. Online condolences may be made to www.chandlersfuneral.com
The family would like to say a special thank you to the wonderful caregivers, Betty Tarr, Joanne MacLeod, Debbie Smiley and Susan Chouinard who looked after Hilda in her home for several years, Also thank you to the Queens County Branch of the V.O.N. and Palliative Care for your guidance and assistance.

Offer Condolence for the family of Emenau; Hilda Beatrice