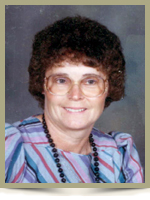 Eaton, Inez Madeline, 76, of Milton, Queens County, passed away peacefully on Tuesday, August 19th, 2014, in Queens General Hospital.  Born in Milton, she was a daughter of the late Cecil and Beatrice (Marie) Wamboldt.  Inez loved her family, but was happiest when spending time with her loving grandchildren and great grandchildren. She was employed for many years at Rodger’s Market, in Milton. Inez enjoyed knitting, making ceramics and volunteering her time at the Queen’s Manor.  She is survived by her loving husband, Charles; daughters, Cathy (James) Wall, of Victor, New York, Peggy (Don) Tweddle, of Brampton, Ontario; son Eugene (Wanda), of Pleasantfield; grandchildren, Michelle Eaton, Misty Eaton (Shawn Burgess), Patricia (Wayne) Jordan, Stephen (Jennifer) Wall, Jessica (Matt) Ready, Brandon Tweddle; great grandchildren, Charley, Hannah, Audrey and Aubree; sisters, Marion Gardner, of Tottenham, Ontario, Kathleen Yuille (Steve), of Fort Saskatchewan, Alberta; brothers, Roger (Geraldine), of Milton, Donald (Gail), of Markham, Ontario, Lloyd (Patty), of Milton; sisters in law, Julie Wamboldt, of Port Howe, Elsie Wamboldt, Florence Wamboldt both of Milton.  She was predeceased by brothers, George, James, Douglas; brother in law, George “John”.  Cremation has taken place under the direction of Chandlers’ Funeral Home and Cremation Service. A Celebration of Inez’s Life will be held on Saturday, August 23rd, 2014, at 2.00 p.m. , from the Milton Christian Church, Disciples of Christ. Pastor Russell Prime officiating. No flowers by request. Donations may be made to Milton Christian Church, Disciples of Christ. Online condolences may be made to the family at www.chandlersfuneral.com

Offer Condolence for the family of Eaton; Inez Madeline