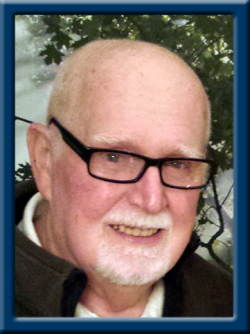 DYER – William R., 82 of Liverpool, Queens County, passed away peacefully in Queens General Hospital, Liverpool on December 2, 2016 with his wife and family at his side. Bob, as he was called by those who knew him, was born on July 19, 1934 in Montreal, Quebec, to the late William and Phoebe (Wright) Dyer. He is survived by his wife Gail (Lewis) of 58 years, his three sons, Mark (Bernice) of Edmonton, AB; Bruce (Shawn) of Maple Ridge, BC; William Jr. of Edmonton, AB; his daughter Cindy of Halifax, NS; his grandsons Nathan and Timothy; his grand daughters Lisa, Kimberly and Kaitlyn; and his great granddaughter, Hayden. He is also survived by his sister Carol Karagheusian of Maple Ridge, BC. He was predeceased by his brother Albert Dyer.
In 1953, Bob began a lifetime of adventure when he sailed around the world while serving as a radio operator with the Royal Canadian Navy aboard the HMCS Haida. After marrying in Montreal in 1958, Bob and Gail made their first home in Greenwood, NS where he was serving with the RCAF. A year later, they were off to Whitehorse, NWT before Bob began a 30 year career with Environment Canada in Goose Bay, Labrador. His work eventually took him to Montreal, Toronto, and Edmonton, where he retired in 1986. Bob never managed to stay in one place very long. Shortly after retiring, he and Gail spent a number of years doing volunteer work in California, Ontario, Mexico, Poland, Germany and Israel. After surviving a serious illness in early 2007, Bob determined there was yet time for one more adventure. He said, “Gail, let’s move back to Nova Scotia!” Several months later, he and Gail moved into his final home across from Fort Point Park in Liverpool. Warmly embraced by their new community, they were eager to give back. In addition to being a proud member of Kiwanis, Bob volunteered his time with the Hospital gift shop, the Queens Manor, the Gideon Bible Society and his local church congregation. He will be missed!
A memorial service for Bob will be held at 10 AM on Tuesday December 6, 2016 at Brooklyn Baptist Church, 35 Shore Road in Brooklyn. Reception will follow.

Offer Condolence for the family of Dyer; William Roberton