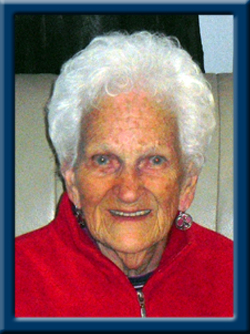 DUFFUS-HARRIS – Ava Patricia “Pat”, 95, of Port Mouton, Queens county, formerly of Yarmouth, passed away peacefully in Queens General Hospital, Liverpool on Saturday, February 27, 2016.
Born in Centreville, Digby County, she was a daughter of the late Albert and Mildred (Holmes) Peters.
Pat worked for over 25 years at Dominion Textiles in Yarmouth. She was an active member of the PC Party of Nova Scotia Ladies Auxiliary and held numerous positions over the years. She was a past member of the Plymouth TOPS. Pat enjoyed Golfing, skating, curling and bowling.
She is survived by her son John “Jack” (Mary) Duffus of Plymouth, brother Owen of BC, grandchildren Holly (Bryden) Bolivar, Kelley (Perry) Saunders, John (Bonnie) Duffus, Jonette (Trevor) Clairmont, Krista (Bill) Christie; great grandchildren Jacklyn, Brett, Victoria, William, Cale, Ty, Carson, Jayven, Tyren, Autumn, Hunter and great great grandchildren Brooklynn and Briella; and special family friend Bette Duffus of Yarmouth.
She was predeceased by her husband Douglas Harris, son William “Bill” Duffus, sister Delma Lawson and brother Blake Peters.
Cremation has taken place under the direction of Chandlers’ Funeral Home, Liverpool. At Pat’s request, there will be no funeral service. No flowers by request, donations may be made to Victorian Order of Nurses, Queens Branch, Palliative Care Lunenburg-Queens or to the Canadian Red Cross. Online condolences may be made to www.chandlersfuneral.com

Offer Condolence for the family of Duffus-Harris; Ava Patricia “Pat”