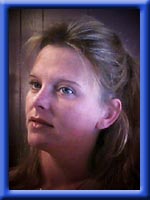 Born in Liverpool, she was a daughter of the late Eric and Valerie (Whynot) Wolfe.

Sheri was employed with Register.com as a telephone sales agent. She was a  waitress for a number of years and worked for Scotia Garden Seafoods as well as working for the Chronicle- Herald as a district manager and paper carrier. Sheri enjoyed her computer time but  especially enjoyed spending time with her family and friends. She was known for her love of animals.

She is survived by her husband Wesley, stepmother Ethel Wolfe of Sandy Cove, her stepson Mitchel of Yarmouth. Sister Tammy MacLean of Saskatchewan and stepsister Tina (Glen) Burgess of Port Medway. Her brothers Eric Jr., of Halifax; Jason of Alberta and stepbrother William (Tammy) Parnell of New Minas.

Visitation will be Friday, January 8th, 2010 from 7 p.m. until 9 p.m. and funeral service will be Saturday, January 9th, 2010 at 11:00 a.m. both in Chandlers’ Funeral Chapel, Liverpool. Chaplain Donald Lawton officiating. Burial will be in Seaside Cemetery, Brooklyn, NS at a later date. No flowers. Donations may be made to the family. Online condolences may be made to www.chandlersfuneral.com

Offer Condolence for the family of Doucette, Sheri Lynn