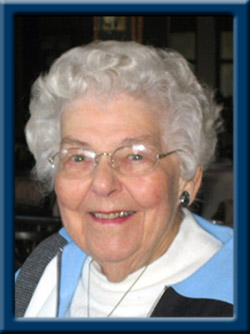 DOUCET – Mabel Grace, of Liverpool passed away peacefully in Queens Manor on Saturday, March 19, 2016 surrounded by her family.
Mabel was born January 14, 1917 in Shoal Lake, Manitoba. She was the eldest daughter of Douglas H. Purdy and Hannah Eliza Purdy (nee Crawford). She was predeceased by her husband, John Cecil Doucet (Jack), sisters Olive Anderson (Carl), Muriel Sprinks (David) and Florence Ripley (Lloyd). She is survived by her brother D. H. Crawford Purdy (Frances), Truro, sons Albert Doucet (Paula), John Doucet (Stella), daughters Marie Barnes (David) and Sheila Doucet (Wil Longard). Grandchildren, Nikki and Andre Doucet, Rene (Robyn), Amelie (Marko) and Kyle Doucet, Adam Barnes (Katie), Matthew Barnes (Rebecca), Sarah King (Ian), Andrew (Corinne) and Michelle Cudmore. Great grandchildren, Paige and Grace Doucet and Solomon Barnes.
Mabel trained at the Brandon General Hospital graduating with her Nursing Diploma in May 1939. She moved to Truro to work in a variety of nursing experiences, VON, private duty nursing, hospital and dental nursing. She was chairman of the Private Duty Sector for the Registered Nurses Association of Nova Scotia. She was instrumental in changing the 12 and 24 hour nursing shifts to 8 hours. In 1943, during the polio epidemic, she was called to work in the Polio Clinic in Dartmouth N.S. She took special training in September 1943 at New York University earning a Certificate of Proficiency in the Kenny Technique of Physiotherapy for the treatment of Polio. In 1945 Mabel returned to Winnipeg to work in the McCharles Surgical Manitoba Clinic. She returned to Nova Scotia to marry Jack Doucet. They were active at St. James Anglican Church in Armdale and were founding members Couples/Social Club at the church. Mabel worked with Jack in his businesses, McKenzie Sales Limited, MSL Food Brokerage Limited and Doucet Trailer Sales. They enjoyed living in Halifax as well as their cottage at Grand Lake and summer home in Beach Meadows.
Mabel was an active volunteer with the Red Cross involving: Senior Services, Friendly Visiting, Telephone Chain and Fun and Fitness. She received several awards recognizing her various volunteer roles. Mabel loved to help others and her home was always open to family and friends. Mabel retired to Beach Meadows in 1983 and for the last number of years she has lived at Ridgewood Retirement Center in Bridgewater and recently at Queens Manor in Liverpool.
Mabel was dearly loved by her family and friends and will be missed by all who knew her. She was a faithful member of Trinity Anglican Church in Liverpool. She had a strong faith in God which she shared with everyone. She believed that, if you are absent from the body you are present with the Lord. (2 Corinthians 5:8)
A service will be held at The Anglican Parish of South Queens (Trinity Anglican Church) in Liverpool on Thursday, March 24, 2016 at 11:00 a.m.. Reverend Bonnie Baird officiating. Burial will be in Holy Trinity Anglican Cemetery, Middleton at a later time. Donations can be made to Queens Manor (www.queensmanor.ca or 902-354-3451), Trinity Anglican Church (903-354-3533) or the Red Cross (www.redcross.ca or 1-800 -418-1111). Online condolences may be made to www.chandlersfuneral.com

Offer Condolence for the family of Doucet; Mabel Grace