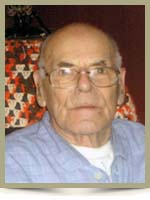 Born in Halifax, he was a son of the late Charles and Mary Doubleday.

John was a veteran of WWII. He was employed for over 30 years at the Nova Scotia Liquor Commission Bottle Exchange in Halifax. He was well known for his collection of lighthouse models and his ability to make them. He loved listening to music , being especially fond of bagpipe music.

He is survived by daughters Mary Ann Anthony, Avis, all of Liverpool; sons Alfred,  Monty,  both of Liverpool, Charles (Bonnie), Edward (Norma),  both of Milton; grandchildren Karen, Keelie and MaKenzie.

Visitation will be held  Tuesday, February 28th, 2012, from 7-9 p.m., and a Funeral service will be held Wednesday, February 29th, 2012, at 2:00 p.m., both from Chandlers Funeral Home, Liverpool. Reverend Donald Lawton officiating. Burial will be in Trinity Anglican Cemetery, Bog Road, Liverpool. Family flowers only. Donations may be made to the family. Online condolences may be made to the family at www.chandlersfuneral.com

Offer Condolence for the family of Doubleday; John Harvey