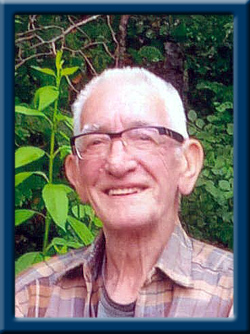 DOREY – Gordon Simon “Gus”, 86, of Liverpool, passed away on Monday, October 10, 2016 in Queens General Hospital, Liverpool.
Born in Liverpool, he was a son of the late Simon and Sybil (Young) Dorey.
Gus worked for Queens Dairy for 12 years before going to work for Syd Samuels and later Ken Gould delivering Imperial Oil Products throughout Queens and Shelburne counties. He was well known as the “ESSO oil man”. In his spare time, Gus enjoyed building and painting bird houses, gardening and, in his early years, hunting and fishing.
Surviving are his daughters Carolyn “Ollie” (James) Wines of Barrie, On; Mary (Arthur) Morse of Hebbville; his sons Brian (Bridget) of Liverpool; Ricky (Cindy) of Hunt’s Point; Sidney (Karen) of Delta, BC. Grandchildren David, Danny, Darryl, Dean, Devon, Jessica, Brittany, Jonathan, Brett, Gavin, Emma, great-grandchildren Luke, Hayden, Barry and Zane. His sisters Florence Foster of Lockeport and Mildred “Billie” Dorey of Liverpool. His brother Vernon (Maxine) of Dartmouth.
He was predeceased by his wife Ethel (Wolfe) his son John, his grandson Michael, his sister Pearl Anthony and his brothers Robert and Arthur.
Visitation will be Monday, October 17, 2016 from 7 until 9 p.m. and funeral service will be Tuesday, October 18, 2016 at 11 a.m. both in Chandlers’ Funeral Chapel, Liverpool. Reception to follow. Burial will be in Zion United Cemetery, Payzant Street, Liverpool. No flowers by request, donations may be made to Queens Manor, Queens General Hospital Foundation or to a charity of your choice. Online condolences may be made to www.chandlersfuneral.com

Offer Condolence for the family of Dorey; Gordon “Gus”