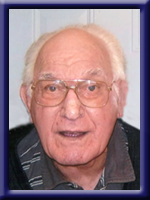 Born in Halifax, he was a son of the late Simon E. and Sybil E. (Young) Dorey.

Bob was a veteran of the Second World War serving as a gunner for the Royal Canadian Army Corps protecting Halifax while on McNabb’s Island and St. John’s, NL and served for 3 and a half years overseas. He was a former employee of Bowater Mersey Paper Company, Brooklyn, Michelin Tire, Bridgewater and worked in the office of the local Imperial Oil Distribution Centre. Bob loved music, especially playing guitar and doing woodwork and carpentry; building his own home and doing masonry. He was a member of the Liverpool congregation of the Jehovah’s Witness.

He is survived by his wife of 64 years A. Bernice (Manthorne), his daughters Marilyn (Ivan) Huskins of Port Mouton, Maryann (Eric) Whynot of Liverpool, his sons Borden (Barb) of Mersey Point and Carl at home. His grandchildren Daniel and Jonathan Huskins, his sisters Florence Foster and Mildred Dorey, both of Liverpool, his brothers Gordon “Gus” (Ethel) of Liverpool and Vernon (Maxine) of Shelburne.

He was predeceased by his sister Pearl Anthony and his brother Arthur.

Cremation has taken place under the direction of Chandlers’ Funeral Home, Liverpool. At Bob’s request, there will be no funeral service. Donations may be made to a charity of your choice. Online condolences may be made to www.chandlersfuneral.com

Offer Condolence for the family of Dorey; Robert Edward “Bob”