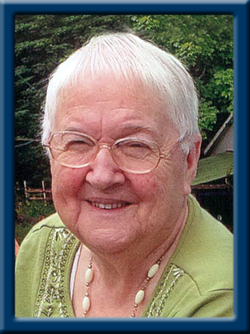 DOREY – Ethel Marie, 84, of Liverpool, passed away peacefully on Wednesday, July 27, 2016 in Queens Manor, Liverpool.
Born in Western Head, Queens County, she was a daughter of the late William and Hilda (Guest) Wolfe.
Ethel was a former waitress at the Mersey Hotel in the late forties. She was a member of the coffee bowling league for thirty years and was a volunteer with the Canadian Red Cross. Ethel was an avid bingo player and enjoyed her “break open” lottery tickets. She especially loved her family and will be sadly missed, but always lovingly remembered.
Surviving are her husband of 65 years, “Gus”; her daughters Carolyn “Ollie” (James) Wines of Barrie, On; Mary (Arthur) Morse of Hebbville; her sons Brian (Bridget) of Liverpool; Ricky (Cindy) of Hunt’s Point; Sidney (Karen) of Delta, BC. Grandchildren David, Danny, Darryl, Dean, Devon, Jessica, Brittany, Jonathan, Brett, Gavin, Emma, great grandchildren Luke, Hayden, Barry and Zane. Her sisters Dorothy Wolfe, Ruby (Milford) Roy and Margaret, all of Halifax and her brother Forrest (Mary Jane) of Parrsboro.
She was predeceased by her son John, her grandson Michael, her sisters Vera Coombs and Kathleen Conrad, her brothers Kenneth, William, Raymond, Archibald, Harold, Donald and an infant brother at birth.
Visitation will be Wednesday, August 3, 2016 from 7 until 9 p.m. and funeral service will be Thursday, August 4, 2016 at 11 a.m. both in Chandlers’ Funeral Chapel, Liverpool. Reception to follow. Burial will be in Zion United Cemetery, Payzant Street, Liverpool. Family flowers only, donations may be made to Queens Manor Dementia Ward, the Alzheimer’s Society of Nova Scotia or to a charity of your choice. Online condolences may be made to www.chandlersfuneral.com

Offer Condolence for the family of Dorey; Ethel Marie