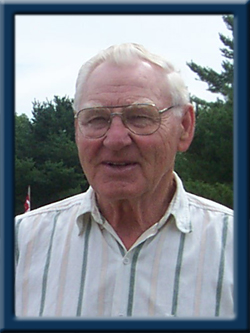 DOMBOWSKY – Dr. Major (Ret.) Louis, 90, of Mill Village, Queens County passed away on October 1, 2018 in Queens General Hospital, Liverpool, NS
Born in Claybank, SK., Lou was a son of the late Martin and Mary (Bauman) Dombowsky.
Lou served with the Royal Canadian Army Medical Corps as a dentist for 28 years in domestic and international postings. Following his retirement from the military, Lou, and his wife Marie, moved to Mill Village where Lou enjoyed restoring and working the property. He also enjoyed spending time with his family especially his grandchildren. He was an active member of St. Gregory’s Catholic Parish in Liverpool. Lou will be lovingly remembered as a quiet, hardworking and devoted husband, father and grandfather.
Lou is survived by his wife of 53 years, Marie (Richard)(Schneider); his daughters Chere Schneider of St. Thomas, ON; Lynn (Steven) White of Charlottetown, PEI; his sons Rick (Colleen) Schneider of Coquitlan, BC; Terrance (Joanne Saulnier) Schneider of Fredericton, NB; Paul Dombowsky of Ottawa, ON. Peter (Tiffany) Dombowsky of Chilliwack, BC. 6 grandchildren. His sisters Mary of Moose Jaw, SK; Leone of Calgary, AB; Joan of Ottawa, ON; Delores of Edmonton, AB. His brothers Rudy of Calgary, AB; Bill of Moose Jaw, SK.
Lou was predeceased by hi sisters Laurie and Clara and his brothers Martin and Gus.
Cremation has taken place under the direction of Chandlers’ Funeral Home, Liverpool, NS. Funeral mass will be held Friday, October 5, 2018 at 11:00 a.m. in St. Gregory’s Catholic Church, Liverpool. Father Charles Offor officiating. Burial will be in St. Gregory’s Catholic Cemetery, College Street, Liverpool. Family flowers only, donations may be made to St. Gregory’s Catholic Church or to Penney Lane Enterprises. Online condolences may be made to www.chandlersfuneral.com

Offer Condolence for the family of Dombowsky; Louis