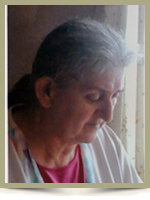 Born in Westfield, she was a daughter of the late Gerald and Adelaide “Avis” (Mansfield) Selig.

Ann was a loving wife, mother, grandmother, great-grandmother, sister and friend to many. She enjoyed playing darts, bingo and singing. She was a former caregiver at Meadowbrook Manor.

She was predeceased by her loving husband Herbert; brother Jeffrey, baby Selig and nephew Cody.

Visitation will be held on Monday, March 31st, 2014, from 7:00 – 9:00 p.m. and a Funeral Service will be held on Tuesday, April 1st, 2014, at 2:00 p.m., both from the Westfield United Baptist Church. Reverend Vic Adams officiating. Burial will be in Hillcrest Cemetery, Westfield. Family flowers only. Donations may be made to the Westfield United Baptist Church or to a charity of your choice. Online condolences may be made to the family at http://www,chandlersfuneral.com

Offer Condolence for the family of Dolliver, Ann Louise