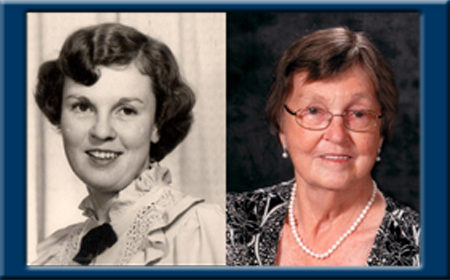 DOGGETT – Louise Mabel, 88, of White Point, Queens County, passed away in South Shore Regional Hospital, Bridgewater on Monday, October 7th, 2019.
Born in Ridley Park, Pennsylvania she was a daughter of the late Ernest A. and Helen (Minnick) (Rosse) Illsley.
Louise worked at White Point Lodge where she met her future husband Gerald before returning to the United States to work as a nanny. She, then, moved back to Nova Scotia to marry her husband of 67 years. She and Gerald spent ten years living in Halifax before settling in White Point where she worked as secretary for Gerald Doggett’s Garage.
She is survived by her husband Gerald, daughter Diane (Richard) King of Tusket, son Kevin (Esther) of White Point, grandchildren Kimberly Doggett (Susan Veinot), Adam (Alyssa) Doggett, Arthur Doggett, April King, Nathaniel King (Morgan Walker). Great grandchildren Ivy King, William and Samuel Doggett. Her sister Helen (Roger) Matthews of Nashua, NH and half sister Jeanne Rosse-Langdon (Bud) of Millsboro, Delaware.
She was predeceased by infant son Gavin, her twin grandchildren John and Heather Doggett and her brother Ernest “Johnny” Rosse.
Visitation will be held on Thursday, October 10, 2019 from 12:00 – 1:00 p.m. followed by a funeral service at 1:00 p.m. both in Wesley United Church, Hunts Point. Reverend Karen Ohrt officiating. Reception to follow in the Hunt’s Point Community Hall. Burial will be in White Point Community Cemetery. Family flowers only, donations may be made to White Point Cemetery Fund, Queens County SPCA or Wesley United Church. Online condolences may be made to www.chandlersfuneral.com

Offer Condolence for the family of Doggett; Louise Mabel