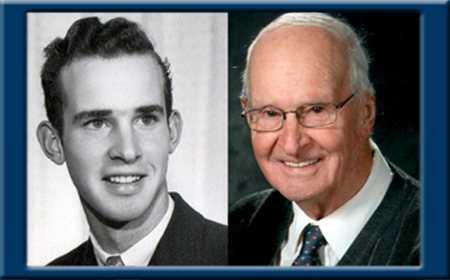 On November 27, 2019, in Surf Lodge, Lockeport, we, the family of Gerald Harry Doggett of White Point, Queens County said goodbye to our dear father, grandfather, brother and friend.
Gerald was born in White Point in 1932 to the late Harry and Mabel (Webber) Doggett.
Raised in the village of White Point, Gerald received his early education in the one room school house and received his higher education at the Liverpool Academy. Cars and trucks became Gerald’s passion at a young age and, after high school, he enrolled in NSTC , Halifax in 1950 receiving his license in master mechanics in 1954. He began his career with Scotia Chev Olds in Halifax and, in 1961, obtained his CVT certificate in Moncton, NB. Returning to White Point in 1962, he ran the Fina station in Hunt’s Point and later the Texaco station. He worked for Rossignol’s Sales and Service for ten years before opening his own business “Gerald Doggett’s Garage” serving his customers for 25 years retiring in 1997. Gerald was a long time member and president of the Jolly Roger’s Square Dance Club, the Antique Auto Club, and a member of the Wesley United Church in Hunt’s Point.
Gerald leaves behind his son Kevin (Esther) of White Point, his daughter Diane (Richard) King of Tusket; grandchildren Kimberly Doggett (Susan Veinot), Adam (Alyssa) Doggett, Arthur Doggett, April King, Nathaniel King (Morgan Walker). Great-grandchildren Ivy King, William and Samuel Doggett. His brothers Gilbert and Wayne (Sharon), both of Dartmouth and David (Carol) of White Point.
Besides his parents, Gerald was predeceased by the love of his life, his wife of 67 years, Louise (Rosse), his infant son Gavin and his twin grandchildren Heather and John.
Visitation will be held from 12:00 – 1:00 p.m. and the funeral service will be held at 1:00 p.m. on Sunday, December 1, 2019, both in Wesley United Church, Hunt’s Point. Reverend Karen Ohrt officiating. Reception to follow in the Hunt’s Point Community Hall. Burial will be in White Point Community Cemetery. Family flowers only, donations may be made to White Point Cemetery Fund, Queens County SPCA or Wesley United Church. Online condolences may be made to www.chandlersfuneral.com.
A special thank you from Gerald’s family to the Queens Home Support workers who, over the years, became more like family and to the loving and caring staff of Surf Lodge, Lockeport. Also, many thanks to the family, friends and co-workers for their love and support through these difficult times. “Side by side or miles apart, you will always and forever be in our hearts.”

Offer Condolence for the family of Doggett; Gerald Harry