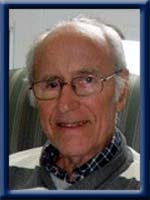 With  great sadness, we announce the peaceful passing of Harold Dobson on April 15th, 2013.

Harold Richard Dobson was born in Little Shemogue, NB on February 22nd, 1931, a son of the late Richard and Bessie (Ibbettson) Dobson.

Harold was a Beaverbrook scholar and a graduate of Mount Allison University. He began his career at the Fraser paper mill in Atholville, NB then moved to Bowater Mersey in Brooklyn, NS as mill chemist in 1957, retiring as President and General Manager in 1992. Harold was active in the community, serving as town councilor and as chairman of the Queens County School Board. He was a member of the queens General Hospital Board, president of the Kinsmen Club and one of the founders of the Queens Memorial Arena. He was appointed to the Nova Scotia Environmental Council. With his friend, Jim Sapp, Harold planned and wrote the proposal for the amalgamation of the Municipality of Queens and the Town of Liverpool. He was a lover of nature and enjoyed gardening, bird watching, beekeeping and fishing trips to Newfoundland and Labrador with his children.

He was predeceased by brothers Warren and Ivan, sister, Vera (Dexter) and granddaughter, Amy.

Cremation has taken place under the direction of Chandlers’ Funeral Home, Liverpool where visitation will be held on Thursday, April 18th, 2013 from 7 until 9 p.m. No flowers by request, donations may be made to Queens Manor, Liverpool. Online condolences may be made to www.chandlersfuneral.com

Offer Condolence for the family of Dobson; Harold Richard