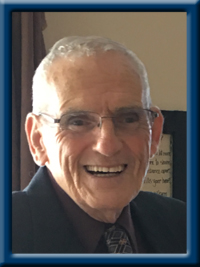 Dixon – Hugh Clarence, age 81, of Liverpool, Queens County, passed away on Monday, June 10, 2019, at home.
Born in Oxford, Nova Scotia, Hugh was a son of the late Clarence and Charlotte (Clyborne) Dixon.
In his earlier years Hugh was Chief of Police, in the towns of Oxford then Liverpool, before going to work in security at Bridgewater Michelin, retiring after 20 years in 1994. Hugh enjoyed walking, woodworking, reading and anything to do with history. Above all else, Hugh was most passionate about his family and spending time with them, especially his grandchildren. He also had a special spot in his heart for his dogs Sam, Haley and grand dog, Sherman.
He is survived by his loving wife of 50 years, Patricia (Wood); daughters, Debra (James) Hatt, of Brooklyn, Michelle (Sean) Wile, of Bridgewater; son, Hugh Richard (Tara) Dixon, of Alberta; grandchildren, Meaghan, Kelsey, Andrew, Emily, Kyle, Ashlyn, Lucilyn, Adalyn; step grandchildren, Brooklyn, Allysa and Rory; sister Sharon (Bill) Croft, of Oxford; special sister in law, Shelley Walker, of Liverpool.
Hugh was predeceased by a sister Joyce in infancy, half sisters, Alma, Pauline; and half brother, Leon.
Cremation has taken place under the direction of Chandlers’ Funeral Home, Liverpool where a celebration of life tribute will be held on Thursday, June 13, 2019 from 6:00 until 8:00 p.m. in the chapel. No flowers by request, donations may be made to the Queens General Hospital Foundation or to the Oncology Department at South Shore Regional Hospital, Bridgewater. Online condolences may be made to www.chandlersfuneral.com

Offer Condolence for the family of Dixon; Hugh Clarence