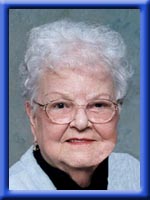 Born in Port Medway, she was a daughter of the late John and Madora (Clattenburg) Verge.

Mildred was one of the first employees at the former Metropolitan Store in Liverpool where she worked for 5 years as well as an Avon representative She was a founding member of the Bayview Senior’s Club in Hunt’s Point and a member of the Senior’s Bowling league. She was a life member of the Ladies Auxiliary Mersey Branch #38, Royal Canadian Legion, Liverpool.

Offer Condolence for the family of Dicks, Mildred Rosalee