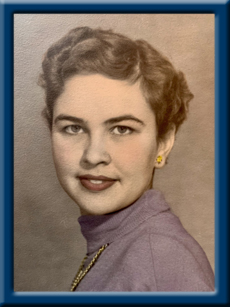 Click Here To Watch Live Stream
Muriel Jean Dexter, 86, of Beach Meadows, passed away peacefully April 27th, 2021 in Queens General Hospital in Liverpool with family by her side.
Born on February 5th, 1935 in Liverpool, to Letie and Landis Crouse of West Berlin, Jean (as she was known to family & friends) dedicated her life to her family, her community and to others in need. After working briefly as a bookkeeper for Rossignol Sales in Liverpool, she married Noel Dexter on August 24th, 1963 and settled down to raise a family.
Jean & Noel welcomely adopted James in April 1967 and subsequently Jacqueline in July 1971. They lived in Bridgewater briefly, then Mahone Bay, where they built their first home. While in Mahone Bay, Jean was active in the Lionettes Club and with the St. James Anglican Church. A year after Park View Education Centre opened in Bridgewater, in 1979, the family moved again to Hebbville, and once again Jean volunteered in her community, this time with the Hebbville Fire Department Ladies Auxiliary.
Prior to Noel’s retirement, they built their last home in Beach Meadows, on the site of what was once the family cottage. Once again she was active in the community, assisting with the St. John’s Anglican Church and their events in Eagle Head.
Jean was always proud of her home and her family and their accomplishments, and that showed in everything she did. Her strong German heritage meant the house was always spotless (in spite of kids) , that wonderful meals were always prepared and that she accounted for every dime of the family budget. As she advanced in her age, it was increasingly difficult for her to stop looking after everyone!
Jean is lovingly survived by Noel, her husband of more than 57 years, son James (Christa) and daughter Jacqueline (Keith Hamilton); grandchildren Ella, Hayden and Layton, along with several nieces and nephews and their families. She was predeceased by her parents; Letie and Landis, and her brother Williard. She will be dearly missed by other friends and their families.
Arrangements are being looked after by Chandlers’ Funeral Home in Liverpool. A memorial service will be held Friday, September 17, 2021 at 3:00 p.m. in Chandlers’ Funeral Chapel, Liverpool. Reverend Judy Cross officiating. Burial will be in the Milton Community Cemetery, Milford Street, Milton.
The family would like to thank Dr. MacMullin, Dr. McKinnon, Dr. Morash and Dr. Woodford along with the nursing and support staff at Queens General for doing all they could to make Jean’s last days as comfortable as possible.

Offer Condolence for the family of Dexter; Muriel “Jean”