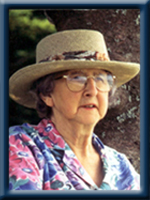 Born in Maplewood, Lunenburg County, she was a daughter of the late Charles and Mina (Conrad) Jodrey.

Marjorie was a former member of the Brooklyn Baptist Church and Highway Pentecostal Church, Sandy Cove and was a Sunday School teacher for both churches as well as being a former member of the Womens Missionary Society.  She served as treasurer for Long Lake Camp in Waterloo for a number of years. She enjoyed knitting and gardening and being outdoors. She will be fondly remembered as a devoted wife, mother, grandmother and great-grandmother as well as ready to meet the needs of seniors in her community.

She is survived by her daughter June (Murray) Goulden of Maplewood, her sons Lloyd (Judith) of Brooklyn, Leon (Donalda) of Tantallon, Phillip (Carol) of Lower Sackville. Ten grandchildren and fifteen great-grandchildren.

She was predeceased by her husband Clarence, her daughter Greta Williams, her sister Ruth Carver and her brothers Oran, Charles, Roy and Robert.

Funeral service will be Sunday, May 26th, 2013 at  2:00 p.m. in Chandlers’ Funeral Chapel, Liverpool.  Reverend Steven Hopper officiating. Burial will be in Seaside Cemetery, Brooklyn. Family flowers only, donations may be made to any charity. Online condolences may be made to www.chandlersfuneral.com

Offer Condolence for the family of Dexter; Marjorie Leone