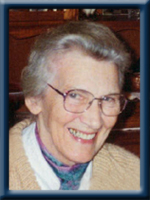 Born in Milton on October 16th, 1924, she was a daughter of the late Warren and Myrtle (Wier) Dexter.

Barbara was educated in Milton and attended High School in Liverpool walking back and forth every day. She taught school in her late teens in Lunenburg County then took training to become a nurse at the Aberdeen Hospital in New Glasgow. Following her training, Barbara worked in the Annapolis Royal Hospital, the Victoria General Hospital  in Halifax, as well as hospitals in Vancouver and Kelowna, BC. She provided nursing care to native villages in British Columbia by flying from Powell River. She studied Operating Room Techniques in Winnipeg General and cared for TB patients in Foot Hills Hospital in Calgary, AB. She returned to Nova Scotia and studied Public Health at Dalhousie and travelled to Belfast, Ireland to study mid-wifery and work in various hospitals in Ireland and Scotland. She was a life long member of the Gospel Assembly Hall in Ninevah, Lunenburg County.

She is survived by her sisters Joan Deeks of Milton, Joyce Denno of Vancouver, BC, sister-in-law Anne Dexter of Digby, brothers William (Norma) of Kenora, ON, Warren (Florence) of Milton, Noel (Jean) of Beach Meadows and many nieces and nephews.

She was predeceased by sisters Doris Roditi, Madeline and brothers Paul and Harvey.

Visitation will be Tuesday, June 25th, 2013 from 7 until 9 p.m. and funeral service will be Wednesday, June 26th, 2013 at 11:00 a.m. both in Chandlers’ Funeral Chapel, Liverpool. Pastor Bruce Barkhouse officiating. A private family burial will take place at a later time. Family flowers only, donations may be made to any charity. Online condolences may be made to www.chandlersfuneral.com

Offer Condolence for the family of Dexter – Barbara Elizabeth