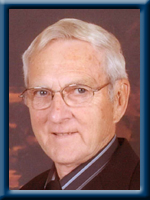 Born in Brooklyn, he was a son of the late John Atwood and Emma May (Tupper) Dexter.

Atwood managed Mersey Lodge for twenty years and served as a licensed guide. He then joined Bowater Mersey Paper Company Limited as an instrument technician for twenty years retiring in 1988. He loved fishing, gardening, hunting and golf. He was a member of Brooklyn Baptist Church and served as a deacon for many years. He served as chairman for the Brooklyn Village Commission for a number of years as well as chair of the former Queens Memorial Arena. He was an avid union member and served on the executive. He and his wife Delphine loved to travel.

He is survived by his wife of 64 years Delphine (Hill), his daughter Rosalee (Murray) Smith of Eagle Head, his son Stephen (Patricia) of Brooklyn, his grandchildren Graham and Matthew Dexter and Scott Smith, his great granddaughters Chloe and Piper, his sisters Louisa Coombs of Brooklyn, Marie Hatt of New Minas as well as a number of nieces and nephews.

He was predeceased by his sister Ethel Crone, his brothers Elvin and Samuel, his half sisters Evangeline Dexter and Valence Murphy and his half brother Clarence “Jack” Dexter.

Cremation has taken place under the direction of Chandlers’ Funeral Home, Liverpool where visitation will beheld Wednesday, August 13, 2014 from 7 until 9 p.m.. Funeral service will be Thursday, August 14, 2014 at 11:00 a.m. in Chandlers’ Funeral Chapel.  Reverend Steven Hopper officiating. A private family committal will take place at a later date. Family flowers only, donations may be made to the Brooklyn Baptist Church, Queens General Hospital Foundation or to the Canadian Cancer Society. Online condolences may be made to www.chandlersfuneral.com

Atwood’s family wish to acknowledge his many caregivers especially his “night angels” Roxina, Bertha and Georgina. Special thanks to Dr. David Gunn, Dr. Andy Blackadar and the nursing staff of the ER and Medical Unit of Queens General Hospital.

Offer Condolence for the family of Dexter; Atwood Melvin