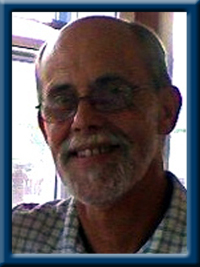 Georges Maurice de Rome, age 72, formerly of Beach Meadows passed away Tuesday, June 2, 2015 in Queens Manor, Liverpool.
Born on November 5, 1943 in Montreal, Georges was the only son of the late Colonel Maurice de Rome and Dorothy de Rome (Le Bel).
After receiving a set of paints for his sixteenth birthday from his mother, Georges discovered an innate talent for painting, creating works of art through both watercolours and oils. In the early 1970s, Georges moved from Montreal to Broad Cove, Lunenburg County and devoted himself to this full time. These paintings now adorn the walls of many across the country and abroad. He paid particular attention to the smallest of details in his work and could bring to life a Nova Scotia seascape or beach rocks, which he loved to depict. To this end, Georges opened his own summer art gallery, The Loft Studio, out of a century-old barn on his property in Beach Meadows in 1983. He operated this gallery for over twenty years. Georges was also an avid reader and, after the closure of his art gallery, began working at South Shore Public Libraries in Liverpool and Greenfield.
He is survived by his wife of 38 years, Cathy (McCabe); his sons, Eric (Isabelle Desrosiers), Laval, Quebec, and Marc (Yazan Ghanem), Kansas City, Missouri; his daughter, Danielle (Richard Oickle), Brooklyn, Queens County; four grandsons, Vincent and Laurent de Rome, and Caleb and Carter Oickle; and sister, Lynn Marr (Lou), Broad Cove, Lunenburg County.
Georges was predeceased by his parents and older sister, Geneviève.
Cremation has taken place under the direction of Chandlers’ Funeral Home, Liverpool. A private family interment will take place at a later date. If so desired, donations may be made to Queens Manor, 20 Hollands Drive, Liverpool, NS, B0T 1K0, the Liverpool or Greenfield branch of South Shore Public Libraries, 135 North Park Street, Bridgewater, NS, B4V 9B3, or a charity of your choice. Online condolences may be made to www.chandlersfuneral.com

Offer Condolence for the family of de Rome; Georges Maurice