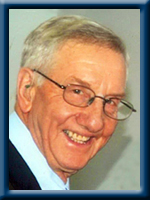 D’ENTREMONT – Anaclet Joseph “Cala”, 82, of Liverpool , passed away peacefully in Queens General Hospital, Liverpool on Tuesday, February 17, 2015.
Born in Lower West Pubnico, Yarmouth Co., he was a son of the late Louis and Edith (Amirault) d’Entremont.
“Cala”, also known as “AJ”, attended school in Lower West Pubnico and later, in 1950, enrolled in Yarmouth Vocational School. In 1953, he started working for Bowater Mersey Paper Company Limited in Brooklyn as a millwright retiring in 1990 after 37 and a half years. He was a member of Local 141 serving as financial secretary and on the negotiating committee. He was president of the Liverpool and District Labour Council now known as the South Shore Labour Council.
Cala was a member of St. Gregory’s Catholic Church, served on the Parish Council as chairperson, was Eucharist minister and was a member of the cemetery committee. He was also a member of the Knights of Columbus, Father Adrian Butt Council 6417, Bridgewater. He volunteered at the Food Bank and did Meals on Wheels.
He is survived by his wife Anna (LeBlanc); daughters Lisa (Stephen) Bowers of Eagle Head, Lynn (Alan) Tomlinson of Walkerton, ON. Sons Robert of Shelburne, Leo of Mill Village, grandchildren Jill, Chad, Jessie, Claire and Ben, great grandsons Gage and Carson. Sisters Jeanne d’Entremont of Middle East Pubnico, Angele Vacon of Ste Anne-du-Ruisseau, Caroline (Ben) d’Entremont of West Pubnico, brothers Benjamin “Bennie” (Theresa), Guy (Aggie), and Gabriel (Evelyn), all of Lower West Pubnico.
He was predeceased by his sisters, Clothilde, Eunice d’Entremont, Aline d’Entremont, Imelda Amiro.
Visitation will be Thursday, February 19, 2015 from 7 until 9 p.m. in Chandlers’ Funeral Chapel, Liverpool. Funeral Mass will be Friday, February 20, 2015 at 11:00 a.m. in St. Gregory’s Catholic Church, Liverpool. Father Keith Billard officiating. Burial will be in St. Gregory’s Catholic Cemetery, College Street, Liverpool. Family flowers only, donations may be made to St. Gregory’s Catholic Church, Liverpool or to the Queens County Branch of the Victorian Order of Nurses. Online condolences may be made to www.chandlersfuneral.com

Offer Condolence for the family of d”Entremont; Anaclet “Cala” Joseph