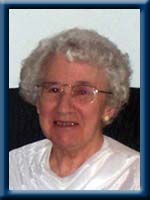 Born February 13th, 1931 in New Grafton, Queens County, she was a daughter of the late Harold and Hilda (Cashman) Conrad.
Velena was a school teacher for almost twenty years teaching throughout Nova Scotia. She was a church organist for many years and served as a Sunday school teacher and as a participant with Vacation Bible School. She enjoyed reading, puzzles and her Thursday morning bowling league as well as music and musical instruments especially the piano and accordion. She was an active volunteer in her community working with organizations such as North Queens Nursing Home.

She was predeceased by her husband Randall.

Visitation will be Sunday, March 3rd, 2013 from 7 until 9 p.m. in Chandlers’ Funeral Chapel, Liverpool. Funeral service will be Monday, March 4th, 2013 at 11:00 a.m. in Calvary Baptist Church, South Brookfield. Reverend Phillip Steeves officiating. Burial will be in Maplewood Cemetery, Kempt. Family flowers only, donations may be made to the North Queens Fire Association, the Canadian Cancer Society or the Heart and Stroke Foundation of Nova Scotia. Online condolences may be made to www.chandlersfuneral.com

Offer Condolence for the family of DeLong; Velena Ruth