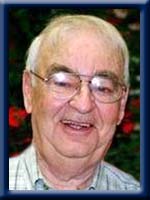 DeLONG – Orlando Jan Graydon  “Lanny”,  75, of Brooklyn, Queens County, passed away peacefully in Queens General Hospital, Liverpool on Saturday, August 4th, 2012 with family by his side.

Born in Kempt, Queens County, he was a son of  late Bentley and Faerlie (Davison) DeLong.

Lanny joined the Royal Canadian Navy when he was seventeen and served five years; his most memorable time was stationed in Churchill, Manitoba with Special Communications Branch.  While he was there, he enjoyed diving and hunting along the Hudson Bay. After his discharge from the Navy, he worked as a diver for the Halifax Shipyards before going to work with Bowater Mersey Paper Company for thirty years, retiring in 1991 from Fire and Security.  He was part owner of South Shore Divers, then later Atlantic Divers. He was a former member of Kinsmen, K40 and Queens Connectors Group.  Lanny enjoyed reading, writing, sketching and carving wood.

He is survived by his wife of fifty years Beatrice (Swansburg), his son Todd (Pam) of Brooklyn, his grandchildren Kayla (Isaac Rafuse) of Liverpool and Nathan of Halifax.  His sisters Donna (Allen) Harrington of Brooklyn, Marion (Colin) Lohnes of Lahave, Lynn (Jack) Conrad of Brooklyn and a number of nieces and nephews.

He was predeceased by his son Wade.

Funeral service will be Wednesday, August 8th, 2012 at 11:00 a.m. from Chandlers’ Funeral Chapel, Liverpool. Chaplain Donald Lawton officiating. Burial will be in Seaside Cemetery, Brooklyn. No flowers by request, donations may be made to Queens General Hospital Health Project. Online condolences may be made to www.chandlersfuneral.com

Offer Condolence for the family of DeLong; Orlando “Lanny”