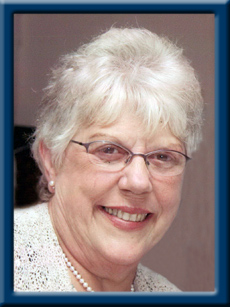 DECKER – Rosemary E., 73, of Brooklyn, Queens County, passed away peacefully in Queens General Hospital, Liverpool on Saturday, January 21, 2017.
Born in Beach Meadows, Queens County, she was a daughter of the late Henry and Elsie (Dexter) Fralic and the youngest of their 10 children.
Rosemary had a long working career starting at Al Sapps store, Campbell’s Jewelry, Able Cable, Liverpool Ladies Wear, Max Harding’s Mens’ Wear; and as a bookkeeper for various charities.
She was also instrumental in helping her husband Philip in their many business ventures including the Scotian Gift Shop, MacDonald’s Second Hand Store and Antique Store, and their rhododendron business.
Rosemary was an active and involved member of her community, she lent her many talents in a volunteer capacity with the Heart and Stroke Foundation, receiving special mention for her 25 years as an area captain. She also volunteered for the Canadian Cancer Society.
A wonderful hostess, Rosemary enjoyed entertaining company with delicious meals. She loved to collect dishes and welcomed any chance to use them.
Rosemary had many hobbies and interests that kept her busy. She was a member of the Queens County Historical Society and the Queens Garden Club, holding various positions with each. She could always be relied on upon to do whatever needed to be done. In 2015, Rosemary received the Outstanding Member Award from the Nova Scotia Association of Garden Clubs.
Rug hooking was a great passion and Rosemary was a member of the Rug Hooking Guild of Nova Scotia and was very active with the local Liverpool group. Rosemary was also a member of the Thomas H. Raddall Library book club.
Rosemary utilized her love of history and genealogy and was a great asset to the Beach Meadows Cemetery and the organization of the Fralic/Frolig family reunion.
Above all Rosemary was dedicated to her family. She was a loving wife to her husband Philip for 46 years. Her pride and joy was her son Brad and she was very proud of his accomplishments and his family – wife Jennifer and daughters Sydney and Kelsey. In 2004 she was thrilled to reunite with her daughter Nancy and family – husband Greg and daughters Jessica and Kristina.
Rosemary adored her four granddaughters and took great pride in the lovely young women they have become. She was thrilled with their involvement in dance and music. Rosemary will be greatly missed by all the people she has touched throughout her life and her loss will be felt by the many organizations and groups that she was active with. Most especially, she will be greatly missed by her loving family.
She is survived by her daughter Nancy (Greg) Prendergast of Sydney, NS, her son Bradley (Jennifer) of Fort St. John, BC, her grandchildren Jessica Prendergast of Waterloo, ON, Christina Prendergast of Sydney, NS, Sydney Decker of Victoria, BC, Kelsey Decker of Fort St. John, BC. Her sister Hazel Mouzar of Brooklyn, her brothers Aubrey (Carol Ann) of Brooklyn and Murray (Shirley) of Clarence, NS.
She was predeceased by her husband Philip, her sisters Gloria Reinhardt, Edith Parnell, Beatrice Selig, Elizabeth Matheson, her brothers Clayton and Percy.
Cremation has taken place under the direction of Chandlers’ Funeral Home, Liverpool where a funeral service will be held on Monday, January 30, 2017 at 11:00 a.m. Reception to follow. A private family burial will take place at a later time in Seaside Cemetery, Brooklyn. Family flowers only, donations may be made to the Canadian Cancer Society or the Nova Scotia Heart Association. Online condolences may be made to www.chandlersfuneral.com

Offer Condolence for the family of Decker; Rosemary Eileen