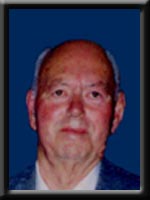 Born in East Ragged Island, Shelburne Co., he was a son of the late Cyrus and Lois (Harding) Decker.

In his early years, Keith was a commercial fisherman. He was a former employee of Bowater Mersey Paper Company and worked in the Groundwood Department. At his retirement, Keith was foreman of the TMP plant. Keith was  very active in his community, serving as chair on the Brooklyn Cemetery Committee for many years and as a volunteer with the Queens County Museum.   He was a member of the Shelburne Genealogy Society and the Queens  Family History Group.

He is survived by his wife “Betty” (Smiley); son Douglas of Brooklyn. Sister Elsie Adams of Dartmouth.

He was predeceased by his sisters Rosalie Decker and Jean Berry.

Cremation entrusted to Chandlers’ Funeral Home, Liverpool. In keeping with Keith’s wishes, there will be no funeral service. Burial of ashes will be at a later date. No flowers by request.  Donations may be made to any charity. Online condolences may be made to www.chandlersfuneral.com

Offer Condolence for the family of Decker – A. Keith