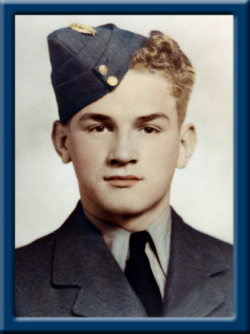 Born in Port Burwell, ON., he was the eldest son of the late Arthur George and Susannah Christobel (Hewitt) Day.
Ken trained originally under the War Emergency Training Program as a machinist at H.B. Beal Technical and Commercial High School in London, ON. in 1942. A veteran of World War II, he joined the Royal Canadian Air Force in 1944 and then volunteered for the Royal Canadian Navy in 1945, training overseas in England in naval aviation. He served aboard the first commissioned aircraft carrier, H.M.C.S. Warrior, and later on the Magnificent and Bonaventure. While living in Dartmouth, he carried out various shore duties at Royal Canadian Naval Air Station Shearwater including air traffic controller. He retired from the navy in 1966 and joined Steel and Engine Products Limited (STENPRO) in Liverpool residing in Brooklyn and later in Milton. He finally realized his dream of becoming a pilot in 1972 and spent many happy years flying a private aircraft and being involved in aviation in Queens County. He was also an avid fisherman, gardener, woodworker and grandfather.
He is survived by his daughter Kendra Day (Ritchie) of Charlottetown; two grandchildren Gracie and Simon Watts and longtime companion Ava Geddes of Upper Stewiacke. He also has three brothers; John (Clara) of Ottawa, ON, Richard (Claire) of BC and David (Gayle) of London, ON and two sisters Doreen (Geerling) Petersen of Chilliwack, BC and Elsie O’Dwyer of London, On.
He was predeceased by his first wife Jean (Chetwynd), a son Kevin, his second wife Florence (Van Norden) and three sisters Julia Marsh, Eileen Slapsack and Mary Johnsrude.
Cremation has taken place under the direction of Chandlers’ Funeral Home, Liverpool. At Ken’s request, a gathering of family and friends will be held at his home at a later date followed by a burial in Milton Community Cemetery. Donations may be made to the Queens General Hospital Foundation. Online condolences may be made to www.chandlersfuneral.com

Offer Condolence for the family of Day; Kenneth Arthur Montgomery