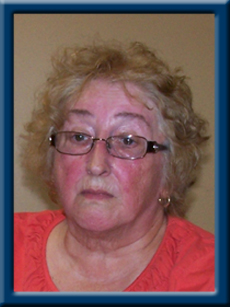 DAURY – Trudy A., 74, of South West Port Mouton, Queens County, passed away peacefully in Queens Manor, Liverpool on Wednesday, April 18, 2018.
Born in South West Port Mouton, she was a daughter of the late W. Ansel and R. Doreen (Roy) Allison.
Trudy worked in various fish plants throughout Queens County doing a variety of jobs. She and her late husband Wilbert were avid bingo players and she was well known as a great cook and could “bake up a storm”. Trudy loved her soap operas, a good game of cribbage, playing scrabble, and going for Sunday drives. She enjoyed time spent with family and friends especially her grandson Brayden who, in later years, began to cook for her.
Trudy is survived by her daughter Angela (Billy) Roy of Port Mouton; her son Richard of Queens Manor, Liverpool; her grandson Brayden; her sister Hazel Fisher of Port Mouton and her brother Gary (Donna) of Liverpool.
Trudy was predeceased by her husband Wilbert, her sisters Jeanie Bowers, Gloria Bouges, Doris Roy, Yvonne and her brother Burnell.
At Trudy’s request there will be no visitation. A private family graveside service will be held at a later date. No flowers by request, donations may be made to Queens Manor, 20 Hollands Drive, Liverpool, NS B0T1K0. Online condolences may be made to www.chandlersfuneral.com

Offer Condolence for the family of Daury; Trudy Anne