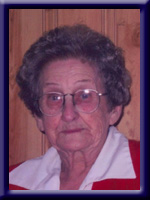 Matriarch of the clan Daury has died in her 94th year. Rita Anice Williams Daury. It is with great joy that we announce to the world that our mother lived on this earth for thirty four thousand and twenty five days (93 years and 58 days).

Born of Hastings Williams and Mary Fisher in South West Port Mouton, Queens Co. December 4th, 1917, Mom passed away Sunday, January 30th, 2011 with family at her side in North Queens Nursing Home, Caledonia. Mom was not only the last surviving member of her immediate family, but also the last surviving great great great great grandchild of Sgt. Peter Fisher of the 76th Regiment of MacDonald’s Highhlanders who was granted land in South West Port Mouton in 1783, part of which still remains in the Fisher family today.

In Mom’s spare time, aside from raising 10 children and her great grandmother Nancy Fisher, she hooked mats and quilted at least one quilt per winter season. Before we moved to Hunt’s Point in 1979, Mom often compiled the voter’s list for the Liberals at election time. She was an avid bingo player well into her 90’s, loved the Toronto Blue Jays as well as bowling.

After the youngest was old enough, Mom went to work at C.W. MacLeod’s Fisheries Ltd. where she worked until she retired in 1980. Shortly after moving to Hunt’s Point, Mom became one of the founding members of Bay View Seniors Club as well as a member of the U.C.W..

Visitation will be held Friday, February 4th, 2011, from 7-9 p.m., at Chandlers’ Funeral Home, Liverpool. A Funeral Service will be held Saturday, February 5th, 2011, at 10:30 a.m., from Wesley United Church, Hunts Point. Reverend Bethe Benjamin-Cameron officiating. Family flowers only. Donations may be made to Alzheimer’s Society of Nova Scotia.  Online condolences to the family may be made at www.chandlersfuneral.com

Offer Condolence for the family of Daury; Rita Anice