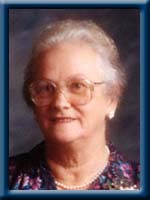 Born in Southwest Port Mouton, she was a daughter of the late Gilbert and Frances (Bowers) Burgess.

Milda was very involved in her community; helping to start projects such as the Little Red Schoolhouse. She ran a general store from her home in Southwest Port Mouton for a time and even drove school bus for a brief period. She always enjoyed helping others in her community such as being “taxi” for trips to Halifax when necessary. She loved to travel; loved to be “on the road” driving. She enjoyed playing bingo and cards and loved to quilt. Many family members will fondly remember and cherish her prized quilts, some of which are still being used today. She loved to cook and bake and over all she will be remembered as a “good, fine lady.”

She was predeceased by her husband Chandler, son Wilbert and brothers Spencer, Randall and Leon.

Visitation will be Monday, February 20th, 2012 from 7 until 9 p.m. and funeral service will be Tuesday, February 21st, 2012 at 10:30 a.m., both in Chandlers’ Funeral Chapel, Liverpool. Reverend Judy Cross officiating. Burial will be in Southwest Port Mouton Community Cemetery. Family flowers only, donations may be made to Queens Manor, Liverpool or the IWK-Grace, Halifax. Online condolences may be made to www.chandlersfuneral.com

Offer Condolence for the family of Daury; Milda Doris