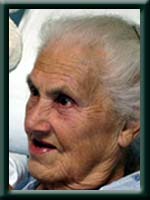 Born in Glastonbury, Connecticut, she was a daughter of the late Cassius and Mavis (Croser) Woodworth.

Edith loved animals and gardening, enjoyed puzzles, word books, reading and yard sales. She will be fondly remembered as a loving mother, grandmother, and great grandmother.

She is survived by her daughters Judith Cunningham of Italy Cross, Leanda Cunningham (George Francis)  and Valerie Flemming, both of Milton, Carolyn (Donnie) McCulloch of BC, Rose Marie Haines of Mahone Bay. Her sons Glenn (Janice) of Pleasantville, Sterling of Vancouver, BC, Stephen of BC, John (Brenda) of Milton. 34 grandchildren, 45 great grandchildren and 4 great great grandchildren.

Visitation will be Sunday, April 7th, 2013 from 7 until 9 p.m. and funeral service will be Monday, April 8th, 2013 at 11:00 a.m. both in Chandlers’ Funeral Chapel, Liverpool. Burial will be in Milton Community Cemetery. Family flowers only, donations may be made to any charity. Online condolences may be made to www.chandlersfuneral.com

Offer Condolence for the family of Cunningham; Edith Mavis