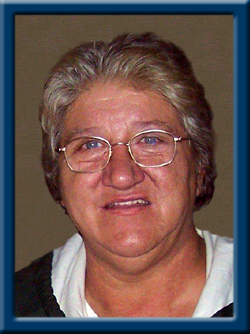 It is with great sadness and broken hearts that we announce the passing of Doreen Beatrice Cunningham, 68, of Liverpool, formerly of Milton. She passed away suddenly and peacefully on Tuesday February 23, 2016 at Queens General Hospital in Liverpool with family at her side.

Born January 19, 1948 on Tupper Street in Milton at the home of her grandparents, she was the daughter of the late Earl Robert McDonald (1973) and Doris Blanche (Berriman) Taillon (1988).

As a young woman, she was employed at the Mersey Hotel and the Radio Café, both in Liverpool. Later, she was custodian at the Milton Baptist Church. Doreen loved life and loved to laugh. She loved to make others laugh. She enjoyed herself wherever she went and whatever she did. She was the life of any party. She loved dancing and would be the first one on the dance floor and the last one to sit down. She was truly one of a kind. She played softball in the 1960s until the 1980s. In the 1970s and 1980s, she played volleyball and bowling and she enjoyed camping at Molega Lake Campground and later at Hibernia. During the last years she enjoyed playing darts at the Liverpool Legion. She also loved going Bingo, usually with her son, Tim, who was her bingo buddy for Monday night Bingo in Milton.

She was never one for travelling but had always wanted to go to Prince Edward Island. In May 2015 she fulfilled that dream. When we crossed the Confederation Bridge and arrived at PEI, she let a few yells out to let everyone know Doreen had arrived. It was an awesome weekend. Though we knew she was a very strong woman, during the last fifteen months she proved that she had more strength and courage than we could ever imagine. Her sense of humor never stopped, even on days that were more than challenging. For 47 years, she was a faithful and hard working member of the Ladies Auxiliary, Royal Canadian Legion, Mersey Branch #38 in Liverpool. She was also a former member of the Queens County CB Club, the Ladies Auxiliary of the Milton Canoe and Camera Club and NS Guides Association.

She is survived by her dedicated husband of nearly 47 years, Donald, of Liverpool who always called her “Maude”, also survived by her loving son, Tim McDonald of Halifax. Together they worked hard to make sure all of her needs were taken care during the past months.  She is also survived by her daughter, Tina (Anthony) Corkum of Brooklyn. She loved being  “Nanny Doreen” to her grandsons, Andrew and Thomas Corkum of Brooklyn, who she adored. She is also survived by her sister Sherri (Ted) Roy of Stellarton, NS,  who was the most caring and helpful sister anyone could have. Other special people in her life were Kevin Whynot of Halifax, who she always said was her “adopted son”. They had a friendship for over 40 years. For the last 40 years she filled in as “Nanny” to Tracy Whynot of Beech Hill. Her brother in law, Earl West of Port Hawkesbury and sister in law Marie Hubley of Liverpool, also survive, as well as many nieces, nephews, cousins and friends.

Besides her parents, she was predeceased by her stepfather Victor Gerhardt (2005), who was “dad” since she was about 2 years old. She was also predeceased by her stepfather Ken Taillon (2000); sister Barbara West (2005); brother Robert McDonald (2001) and infant brother Duncan Edward McDonald (1936); her infant daughter Theresa Lynn Cunningham (1975) and infant sons Donald Keith Cunningham Jr (1969) and Tony William Cunningham (1980), nephews, Pat West (2003), Robert D. E. McDonald (1971) and niece Tracy McDonald (1973). She also lost many close friends over the years, in particular her special friends, April Grant (2005) and Doris Conrad (2013), who she missed terribly and mentioned often.

Doreen loved animals and we often commented that the stray cats in our neighborhood were the healthiest of any because of the love and care she gave. Because of her love of pets, donations in her memory may be made to the Queens SPCA Box 2012 Liverpool, Nova Scotia BOT 1KO

Cremation has taken place under the direction of Chandlers’ Funeral Home, Liverpool, where visitation will be held Sunday February 28, 2016 at 7 p.m. and a celebration of life will be held Monday February 29, 2016 at 11:00 a.m. Rev. Judy Cross officiating. Burial will be at a later date in Milton Community Cemetery.  Online condolences may be made to www.chandlersfuneral.com

Offer Condolence for the family of Cunningham; Doreen Beatrice