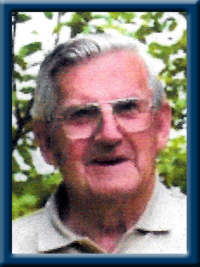 CROWELL – George Donald Irving, 94, passed away peacefully on Sunday, June 21, 2015 at Camp Hill Veterans Memorial Hospital in Halifax.
Born in Clark’s Harbour on May 28, 1921 to the late Washington and Hilda (Daley) Crowell.
He is survived by his son David (Karen) of Cole Harbour; daughter Joanne of Lower Sackville; son Donald (Wanda) of Lower Sackville; grandchildren Nicholas of Fort MacMurray and Matthew of Kentville; Chelsea and Jeremy of Liverpool, Brittni and Brady of Halifax and sister Isobel Blades of Centreville.
He was predeceased by his wife Betty (Ptolemy); daughter Janet Smith and brothers Gerald, Gordon and Robert.
George started his electronics career during World War II as a telegraphist on Fairmile patrol boats protecting Canada’s eastern seaboard. After the war, he was stationed at various radio installations around Canada and finished his service at Lake Albro radio station. He witnessed the VE Day riots in Halifax and the Bedford Magazine explosion. Saving himself and the radio station’s puppy mascot before the windows blew in. He joined Steel and Engine Products Limited (STENPRO) in Liverpool and for many years repaired and installed all manner of marine electronics. Later he became an employee of Nova Scotia Power as a technician, making sure the electricity flowed to all parts of the province. He retired from there after 15 years of service.
George’s interests included fishing, bird and animal watching, photography, gardening and spending days at the cottage on Ponhook Lake. He played clarinet for the Bowater Mersey Band and performed at many functions including concerts at the 1967 Canadian Expo in Montreal. One of his passions was a s a “ham” radio operator. He had an impressive array of radio and antenna gear that allowed him to make contact with “hams” around the world. During his later years he spent most every Sunday going for a drive in the country of the nearest church supper with his friend Louisa. He had a thirst for knowledge, especially about maritime history and was always reading books or “playing” on the computer.
The family wish to thank the staff at both Queens General Hospital and camp Hill Veterans Memorial Hospital for their kind and compassionate care during dad’s declining health.
We invite you to a service at Chandlers’ Funeral Home in Liverpool on Saturday, July 11, 2015 at 1:00 p.m. Followed by a reception. A private family interment will be held in Pine Rest Cemetery, Greenfield. Family flowers only, donations may be made to the Alzheimer’s Society of Nova Scotia or to a charity of your choice. Online condolences may be made to www.chandlersfuneral.com

Offer Condolence for the family of Crowell; George Donald Irving