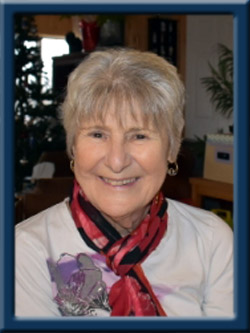 Born in St. Jerome, Quebec, she was a daughter of the late Richard and Rita (Sephton) Ouellette.

Louise and her family moved from Mount Laurier, Quebec to Vancouver and then to Calgary, where she spent most of her youth. She met her husband Tim on New Years Eve, at her mothers house in Vernon, B.C., in 1981. They quickly fell in love and were married in 1982 and moved to Nova Scotia in 1983. Louise and Tim agreed that she would stay home to bring up the family while also supporting Tim in his work efforts, encouraging him to continue his education to further his career. She was a hard worker and was always on the go as she and Tim lived a very spontaneous lifestyle. Louise and Tim enjoyed going camping, but she was always happy to return to her home. She had many hobbies, some of which were painting, tole painting and planting flowers (perennials). Over the last little while she enjoyed feeding the crow’s in the back yard, especially her favorite “Koko” who she adopted as a pet. Above all else, Louise was most passionate about her family and spending time with them, especially her grandchildren.

Cremation has taken place under the direction of Chandlers’ Funeral Home, Liverpool. A celebration of Louise’s life will be held on Thursday March, 5th, 2020, from 6:00 until 8:00 p.m.,with a prayer service at 7:30 p.m. in Chandlers’ Funeral Chapel, Liverpool, Nova Scotia. Inurnment will take place at a later date at Lakeview Memorial Gardens, in Kelowna, B.C.. No flowers by request, donations may be made to the Kidney Foundation of Canada. To share memories or condolences, please visit www.chandlersfuneral.com

The family would like to thank Amy Plummer, Lynn Malone and Margo Godfrey for their love and care in helping Louise to stay in her own home up until the end.

Offer Condolence for the family of Crowe; Louise Beatrice