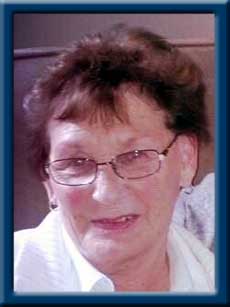 CROUSE – Norma M., 82, of Liverpool, Queens County, passed away peacefully in Queens General Hospital on Thursday, January 10, 2019 surrounded by her family.
Born in Port Medway, Queens County, Norma was a daughter of the late Perleigh and Alice (Hiltz) Baker.
Norma went to school in Port Medway and Liverpool High School and attended the Bridgewater commercial School receiving a degree in Secretarial. She worked at the Royal Bank in Liverpool for 10 years. Norma enjoyed her trips to Spain and had a passion for country music.
Norma is survived by her daughter Vicki (Bruce) Leaman of Liverpool, her sons Kevin (Darlene) Henderson of Port Medway, Shawn Henderson of Liverpool, Step sons Gary (Linda) Crouse of Liverpool and Richard (Andrea) Crouse of Toronto. Her grandchildren Brendon and Brooke Leaman, Kevin Henderson Jr., Mark Henderson, Ashley Henderson, Sarah Henderson, Ryan Henderson, Keagan O’Brien. Step grandsons Christian and Nicholas Crouse. Great grandchildren Taylan, Romee, Bentley, Isla and Violet. Her brother Reg (Glenda) of Liverpool.
She was predeceased by her husband Ed, her brother Richard.
Cremation has taken place under the direction of Chandlers’ Funeral Home, Liverpool. A graveside memorial service will be held Tuesday, January 15, 2019 at 2:00 p.m. in Greenwood Cemetery, Port Medway located on Atkins Lane, just past the Port Medway Fire Hall on Long Cove Road. Family flowers only, donations may be made to a charity of your choice. Online condolences may be made to www.chandlersfuneral.com.

Offer Condolence for the family of Crouse; Norma Marileigh