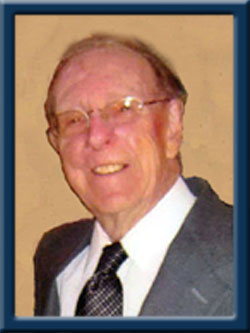 Born in Midville Branch, Lunenburg County, he was a son of the late Joshua and Louetta (Beck) Crouse.

Ed moved to Halifax with his brother Gerry at a young age and worked at the Canadian Forces Training Base during WWII as a Red Cap, being too young to enlist. After WWII, he became the parts manager at Hebb Motors, where he worked until he took over Smith’s Furniture and Appliances in 1965, from his first wife’s mother and stepfather, Roy and Vivian Smith, which he ran until his retirement. Ed loved to travel. He visited many destinations over the years but he had a special place in his heart for Spain having spent 12 winters living there. He was a former member of the Winds of Change Dramatic Society, Liverpool K40, Kinsmen Club of Liverpool and an elder at Zion United Church, Liverpool. He also enjoyed antique cars and playing and listening to music.

He was predeceased by his first wife, Marilyn; sister Wilma Mailman and a brother, Gerald.

Cremation has taken place under the direction of Chandlers’ Funeral Home, Liverpool. A Celebration of Ed’s Life will be held on Saturday, December 23rd, 2017 at 2:00 p.m., from Chandlers’ Funeral Home, Liverpool. Reverend Carol Smith officiating. Family flowers only, donations may be made to a charity of your choice. To share memories or condolences, please visit www.chandlersfuneral.com

Offer Condolence for the family of Crouse; Edgar Earl