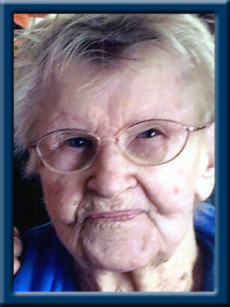 CROUSE – Althea Muriel, 90, of Liverpool passed away peacefully in Queens General Hospital on Sunday, March 10, 2019.
Born in Charleston, Queens County, she was a daughter of the late Judson and Cora (Arnburg) Rhyno.
Althea was a former kitchen aide at Queens general and a former member of the Charleston Fire Department Ladies Auxiliary. She was an avid bingo player and loved plants. Althea was all about family. She enjoyed her grandchildren and great grandchildren and was known as a great cook and baker.
Surviving are her daughter Gail Jollimore of Liverpool; her sons Barry of Liverpool, Randall (Valerie) of Middlefield, Michael of New Germany. Grandchildren: Kristy, Justin, Megan, Ashley, Bradley, Erin, Matthew, Schuyler, Ryan, Michael and Eli. Her sister Carol Pollock of Airdrie, AB.
She was predeceased by her husband St. Clair, her son Terry and an infant brother.
Cremation has taken place under the direction of Chandlers’ Funeral Home, Liverpool, NS. At Althea’s request there will be no funeral at this time. No flowers. Donations may be made to a charity of your choice. Online condolences may be made to www.chandlersfuneral.com

Offer Condolence for the family of Crouse; Althea Muriel