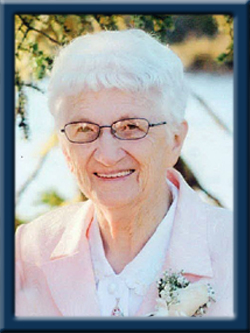 Born in Spry Bay, she was a daughter of the late George and Hilda (Boutilier) Andrews.

Jennie moved to Tancook Island as a young child and later to Brooklyn when her husband Walter retired. She was well known for her cooking, cleaning and knitting skills. She was a member of the Brooklyn United Baptist Church. Above all else, Jennie was most passionate about her family and spending time with them.

Family will receive friends from 7:00 – 9:00 p.m., on Friday, April 7th, 2017 at Chandlers’ Funeral Home, Liverpool. A Funeral Service will be held on Saturday, April 8th, 2017, at 1:00 p.m., in the Brooklyn United Baptist Church, Brooklyn. Reverend Dr. Steven Hopper officiating. Burial will be in Seaside Community Cemetery, Brooklyn. Family flowers only. Donations may be made to the Brooklyn United Baptist Church. To share memories or condolences, please visit www.chandlersfuneral.com

Offer Condolence for the family of Cross; Janet “Jennie” Louise