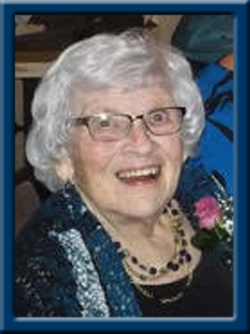 The life journey of Marion E. Crosby came to an end peacefully on October 30 2016 at the South Shore Regional Hospital in Bridgewater, Nova Scotia. And what a journey it was. Lasting ninety-one years, she was a mother of six, grandmother of thirteen, and great grandmother of 15. Family was her joy.
Although life began for Marion in Stewiacke, Nova Scotia, she lived all those many years as a resident of Liverpool. At the young age of seventeen, and right out of high school, she began her teaching career in a one-room school house, teaching grades primary to twelve. Later as a graduate of The Provincial Normal School, she touched the lives of hundreds of children over many decades.
Marion, the teacher, and mother of a large demanding family, always found time to give back to her community and have a little fun on the side. When not out on the ice throwing stones, she was often found in the kitchen or boardroom of the Liverpool Curling Club working on the latest dinner or upcoming bonspiel. She was an active member of Zion United Church and a leader of C.G.I.T., and if there was a committee, decorating, or a supper to help with, Marion could be counted on to pitch in.
As a young girl, basketball played a big part of her growing up. Golf was to follow many years later, and baseball on TV was always a favourite, but it was bridge that may have been her second joy in life, and she continued to play at least once a week into her ninetieth year. Between dealings, she discovered the art of quilting, and like all sewers, accumulated her own closet full of material.
Marion’s ninety-one years took her to many places around this world, but her times at her beloved log cabin in Beach Meadows could never be topped, and she missed only this season of 2016 in the last sixty summers.
Marion was predeceased by her mum and dad, Helen and Robert Fulton, husbands Donald MacLean and Herbert Crosby, sister Audrie , sister-in-law Barbara Fulton and son-in-law Tom Rawding.
She is survived by her children, Mardi Rawding , Jo Teale (Bob) , Judith Atherton(Terry) Stephen Crosby (Betty), Hugh Crosby, Alan Crosby (Jacqueline)her brother Hedley Fulton, brother-in-law Henry Wasylasko and loving grandchildren, great grandchildren, other in-laws, nieces and nephews.
Cremation has taken place under the direction of Chandlers’ Funeral Home, Liverpool, NS. A celebration of Marion’s life will take place on Thursday, November 3, 2016 at 11:00 a.m. in Zion United Church, Liverpool. In lieu of flowers, donations may be made to Thomas Raddall Library in Liverpool or Queens General Hospital. Online condolences may be made to www.chandlersfuneral.com.
The family would like to thank the medical staff of the 4th floor of the South Shore Regional Hospital for their kind and compassionate care of Mom over the past few weeks.

Offer Condolence for the family of Crosby; Marion Ethel