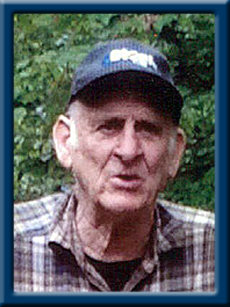 CROFT – Clyde J., 76, of Milton, Queens County, passed away peacefully at home on October 4, 2018.
Born November 9, 1941 in Milton, Clyde was a son of the late Lester and Evelyn (Whynot) Croft.
Clyde started out his working life at an early age and with very little “investment capital” yet managed to develop quite a thriving business. At various times, he operated a salvage yard and a busy towing service. He was recently recognized by the Queens Detachment of the RCMP for their appreciation of his ‘many years of dedicated towing and recovery services’. Clyde was a creative welder as evidenced by some of the art forms seen in his yard, in addition to all the other more standard jobs he did. He was an excellent provider for the four-legged creatures on his property, especially his cats.
Though gruff and curmudgeonly on the exterior, Clyde had a mischievous sense of humour and loved to tease. Those who knew him learned early on to not bargain excessively with him as invariably prices would rise as a result. One also had to be mindful of avoiding anything that might cause one’s name to (very publicly) appear on Clyde’s Wall of Shame. It was far preferable to have one’s name carved into a growing pumpkin in his garden than to appear on the Wall. To many people, Clyde was quietly and remarkably generous; he will be missed by a multitude of souls.
Clyde is survived by his son Jordan of Liverpool, his granddaughter Felicity of Dartmouth, his brothers Doug (Beverly) and David, both of Milton and several nieces and nephews. Also left to miss his presence are devoted friends and caretakers Ted Lavender, Kevin Croft, Lenny Patterson, Rod Ismaily and Gloria Zwicker who made Clyde’s last weeks and months much more bearable and allowed him to stay in his home as long as he did.
Besides his parents, Clyde was predeceased by his brothers John, Elmer and William “Billy”; his niece Sherry Croft and loyal friend Glen Munroe.
Visitation will be Sunday, October 7, 2018 from 7 until 9 p.m. in Chandlers’ Funeral Home, Liverpool. Funeral service will be Monday, October 8, 2018 at 2:00 p.m. in Chandlers’ Funeral Chapel, Liverpool. Burial will be in Milton Community Cemetery.
Flowers appreciated. In lieu of flowers, donations may be made to the Queens S.P.C.A., Queens County branch of the Victorian Order of Nurses or to a charity of your choice. Online condolences may be made to www.chandlersfuneral.com
Special thanks to Dr. Tim Woodford for his many home visits; Palliative Care Services
coordinator Natalie Brooks; VON, Queens County Branch and Queens County Home Support Services.

Offer Condolence for the family of Croft; Clyde Jorden