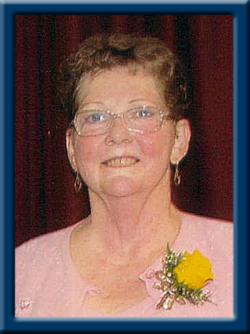 CROFT – Bonita Adele, 67, of Buckfield, Queens County, passed away peacefully in Queens General Hospital, Liverpool on July 24, 2015.
Born in Liverpool, she was a daughter of the late Francis and Beatrice (Baker) Joudrey.
Bonita was a secretary for Freeman Lumber for over ten years. She was a member of the Greenfield Sewing Circle, the Ladies Auxiliary Greenfield Fire Department , the Jolly Ponhookers Seniors Group and the Greenfield United Baptist Church where she sang in the choir, and taught Sunday School. She was also a Brownie and Girl Guide Leader in her younger years.
She is survived by her husband Douglas; her daughters Darlene Crouse of Waterloo; Amanda Croft (Jamie Saucy) of Halifax; her son Dennis of Buckfield and her daughter in law Sindy Croft of Greenfield; her grandchildren Allie (Jason) Veinot, Shelby Crouse, Noah Johnson, Melissa Croft and her great grandson Ryker Veinot; her sisters Betty Roy and Brenda Croft ( David McKinnon), both of Greenfield and many nieces and nephews.
She was predeceased by her sister Pat McFeters.
Cremation has taken place under the direction of Chandlers’ Funeral Home, Liverpool. Visitation will be Tuesday, August 11, 2015 from 7 until 9 p.m. in Chandlers’ Funeral Chapel, Liverpool. Funeral service will be Wednesday, August 12, 2015 at 11:00 a.m. in Greenfield United Baptist Church. Reverend Wade Harvey officiating. Burial will be in Pine Rest Cemetery, Greenfield. Family flowers only, donations may be made to The Greenfield United Baptist Church, the Canadian Cancer Society or to a charity of your choice. Online condolences may be made to www.chandlersfuneral.com

Offer Condolence for the family of Croft; Bonita Adele