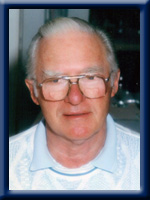 COSBY – Lewis Everett, 88, of Liverpool passed away in Queens General Hospital, Liverpool on Saturday, October 1st, 2011.
Born in Toronto, Ontario, Lew served during World War II as a member of the Royal Canadian Navy. Upon his return to Canada he met and married the love of his life, Tess.
Lew worked as a town planner for the city of London, Ontario before moving his family to the Maritimes. Lewis was a real estate agent throughout most of his life, as well as a respected entrepreneur who owned and operated many business enterprises throughout Nova Scotia. Locally, Lew sowed the seeds for what has now become Cosby’s Garden Centre. He was also employed by Bowater Mersey Paper Company as a draftsman for many years.
Lew pursued and excelled in many passions. He was an avid bridge player, gardener and traveler. He enjoyed acting in the Winds of Change as well as restoring old homes and dabbled at inventing. Lew embraced opportunity and thrived on challenges.
Lewis is survived by his wife of 68 years, Tess, sons John (Mary) of Chilliwack, B.C., David Franklin of, Liverpool, Chris (Wayne) of Prospect and daughter Sue (Ivan) Higgins of Liverpool. Grandchildren Aaron, Ryan, Meaghan, Dana, Kyle, Hayley, Angus and Adam and three great-grandchildren.
It is, however the dignity and respect he showed toward all, the unconditional love of his family, his terrific sense of humour and his infectious laugh that will never be forgotten.
Cremation has taken place under the direction of Chandlers’ Funeral Home, Liverpool. A funeral service will take place on Friday, October 7th, 2011 at 11:00 a.m. in the Trinity Anglican Church, Liverpool. Reverend Donald Lawton officiating. No visitation by request. A private family burial will take place at a later date. Donations may be made to the ALS Society of Nova Scotia or to Queens General Hospital, Liverpool. Online condolences may be made to www.chandlersfuneral.com

Offer Condolence for the family of Cosby; Lewis Everett