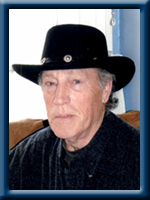 COSBY – John Robert, 74, of Milton, Queens County, passed away peacefully in Queens General Hospital, Liverpool on Friday, March 13, 2015 after a courageous battle with cancer.
Born in Gainsborough, ON, he was a son of the late Harry and Margaret (MacPherson) Cosby.
John served with the Royal Canadian Navy for a number of years before working with the Satellite Station in Charleston as a instrument technician. He was a former employee with Bowater Mersey Paper Company Limited and a delivery driver for Farmer’s Dairy. He was also an ambulance attendant with the former Chandlers’ Ambulance Service in Liverpool. He was an insurance salesman and Renaware salesman for a time and was owner-operator of The Sportsman Restaurant in Milton. At the time of his death, John was a dockside monitor for Barrington Catch. John will be fondly remembered by his family and friends as an unselfish, forgiving and kind person who loved his family immensely and left this world with no animosity to anyone.
He is survived by his companion Valerie Rhyno, his daughters Joanne (Robert) Klatt of Victoria, BC, Jennifer Cosby (Matthew Conrad) of Liverpool, son Les (Ann Wentzell) of Bridgewater, grandchildren Ryan and Connor Klatt, sisters Twila Steiger of St. Catharine’s ON. Gail Freisen of Woodstock, ON. Brother Jim , USA and his best friend and traveling companion Sophie.
Cremation has taken place under the direction of Chandlers’ Funeral Home, Liverpool. At John’s request, there will be no funeral service. No flowers, donations may be made to the family or to the Canadian Cancer Society. Online condolences may be made to www.chandlersfuneral.com

Offer Condolence for the family of Cosby; John Robert