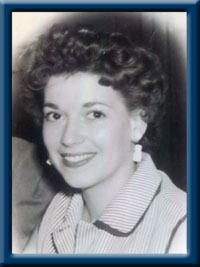 COSBY – Esther Theresa “Tess”, 92, of Liverpool, passed away peacefully in Queens Manor, Liverpool on Monday, October 16, 2017.
Born in St. John, NB, on October 30, 1924, she was a daughter of the late Theophile and Angela (White) Goguen.
Tess had an insatiable thirst for knowledge and was self-taught on many levels. She loved to read and travelled extensively; was a passionate artist and a student of John Cooke at 10 Mile House in Bedford; was a house renovator and decorator. She enjoyed dancing, bridge, singing, curling, walking and was a member of the Winds of Change Theatre Group in Liverpool. She worked with special needs and autistic children.Tess was very open minded and progressive in her thinking; compassionate and kind, and had a fantastic sense of fashion. She will be fondly remembered by her family and friends as a tiny lady full of life, but with a quick wit and sometimes with a little bit of sarcasm.
She is survived by her daughter Susan (Ivan) Higgins of Brooklyn; her sons John (Mary) of Abbottsford, BC; Christopher (Wayne Bennett) of Bayside, David of Mersey Point. 8 grandchildren and 11 great grandchildren. Her brother George of St. John, NB.
She was predeceased by her husband of 68 years Lewis; her sister Phyllis and her brother Theo.
Cremation has taken place under the direction of Chandlers’ Funeral Home, Liverpool. A memorial service will be held Wednesday, October 18, 2017 at 2:00 p.m. in Chandlers’ Funeral Chapel, Liverpool with Reverend Judy Cross officiating. Reception to follow. Burial will be in Oceanside Cemetery, Hunts Point. Family flowers only, donations may be made to Queens Manor, Liverpool, Alzheimer’s Society of Nova Scotia or the ALS Society. Online condolences may be made to www.chandlersfuneral.com

Offer Condolence for the family of Cosby; Esther Theresa “Tess”